Over time, so-called Futurists have visited other countries and events like the World Fairs to see what trends and technology, from zippers to moving walkways to FaceTime, might one day change the world. Today, people visit cities like Abu Dhabi, Taipei, and Singapore to see innovative architecture. They might travel to Silicon Valley to order a pizza that has been made by a robot and delivered by a self-driving truck. And the really hardcore futurists don’t even travel anymore – they’re praying to the technogod and preparing for collective consciousness in the AI matrix. Porridge.blog is here to offer you our best guesses on cutting edge porridge! We visited Finland, and have seen the future.

When we first started the blog, we reached out to Darra Goldstein, an awesome food scholar and Russian cookbook author with some questions about Russian kasha. She wrote back with excellent answers to our questions, and advised that we look into Finnish porridges, as the Finns are “probably the most fanatic” about the subject. Cuisine does not exist in a vacuum. Neither the future nor the present can be accurately contextualized without a solid understanding of what has come before. To ground our investigation in solid understanding of the bio-social-cultural factors at play, on our first day in Helsinki we visited the Finnish National Museum. We highly recommend the experience to anyone in town, and especially to tourists like us, who have never been to Finland before.  The building is a great example of Finnish architecture, the exhibits are interactive and easy to read, and overall the museum tells a very cohesive narrative of the national psyche in all of its expressions, from death metal to coffee culture to social welfare. 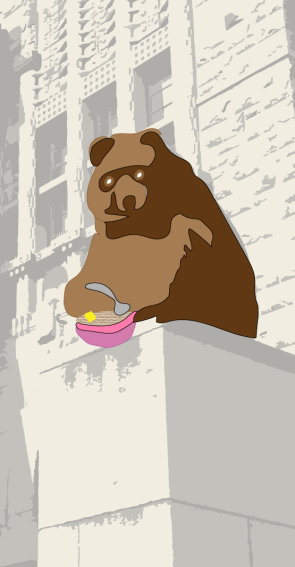 What we learned is that Finnish identity is deeply influenced by genius loci, or the spirit of geography and place. Finland is located high up near the Arctic Circle, and for most of the year it is a land of extreme darkness and cold. This is balanced by brilliant brief summers, in which the sky stays light until 11pm and citizens forage for abundant wild blueberries. The country’s mascot is a bear: the Finns are tough winter warriors, and they take advantage of their harvest. Finnish architecture and interior design is premised on maximizing light and comfort. The earliest humans in Finland relied on the woods for their food and shelter, and so the forest has always been a space of wonder. Wooden interiors around the country pay homage to this feeling. Mood: cozy, rustic, practical, Hobbit.

Finland wasn’t a country until the turn of the 20th century, and their political identity has long been complicated. They suffered at the hands of the Russians, and therefore hated them so much that they fought for the Axis during WWII. They sent a lot of refugees to neutral Sweden, and have since been mocked by the wealthier Nordic countries for being country bumpkins. The rest of the world thinks they’re sort of weirdos, and they seem to have embraced this classification.

THIS LINK will take you to a brilliant clip from the country’s own exhibition at the 2017 Venice Biennale, a multimedia installation called the Aalto Natives. The story covers Finnish identity, nationalism, and religion with muppets, drawings, songs, and more. The clip is NSFW, and feel free to skip ahead to 1:50 if the penis character is too much, but at least one of the porridge bloggers thinks that it is hilarious satirical commentary.

The country’s development after the war focused on functionalism and social welfare. Growing up in such a cold place with constant struggle against oppression led the Finns to nurture a deep national sense of caregiving. For example, expectant Finnish mothers receive “maternity packages” from government hospitals with items like diapers, clothing, blankets, and bottles. The box can be used as a crib. Because the country has faced multiple periods of poverty and unemployment, they value pragmatism – thrift stores are popular, and there is an active effort to use resources sustainably.

Finland is also a hotspot of regional modernism in Western design, and has been since the early 20th century. In fashion, architecture, industrial and graphic design, the Finns quietly lead the way in the invention of functional, quirky, useful products. Most every building is cozy, and nearly every chair is comfortable. Sauna – the Finnish museum has a truly amazing 1960s era video that explains the health benefits of this steamy anti-Winter social phenomenon – is a national treasure. Why isn’t sauna popular in every cold place in the world? It’s a true mystery.

So what does Finnish design have to do with porridge?

Hold your horses, feisty one. In the book Populuxe: the look and life of America in the ‘50s and ‘60s, Thomas Hine argues that modern foods come from modern contexts. National culture affects life on every scale: from building to bowl.

The recipe that truly sums up Populuxe living first appeared in 1954 on the back of the box of Lipton’s dehydrated onion soup mix. It was called California dip, and it was concocted simply by mixing the powder inside the box with processed sour cream. […] Using potato ships as little shovels, you gathered up the deliciously salty but drip-prone liquid and popped it, potato chip and all, into your mouth as quickly and gracefully as possible. There was anxiety in all of this, but also immense satisfaction. […] It is probable that few chip-and-dip eaters considered the snack as a purely visual phenomenon, but with decades of perspective it is easy to see how perfectly it fit into their environment. Formally, the potato chip, with its free-form shape and doubly curving plane […] is a very short jump to the great doubly curving furniture of Charles Eames and Eero Saarinen*.

And to this manufactured object was added that extra something that was understood to transform it. Serving plain potato chips to guests was not quite enough. But with the addition of dip, the stopgap snack turned into a party. […] The dip ruined the pure form of the chip, but it added symbolic weight. It also added physical weight that often cracked the chip. The engineering solution was the corrugated chip, whose form presaged the ridged concrete roof found on so much roadside architecture around the turn of the 1960s.

Porridge is like chip and dip but even more significant. It’s been eaten for a LONG time in Finland, and still hasn’t been completely replaced by breads or other dishes. How this every day food is adapted to modern consumption tells us about broader cultural sentiments.

This is how Finnish culture inspires its porridge:

Food should be mindful of Spaceship Earth.

The Finns harbor a deep respect for their environment. They are good recyclers. This sustainable mindset translates to a lot of young Finnish vegans, who choose to eat plant foods rather than animal foods on the premise that plant –> person is a much more efficient caloric transfer than plant –> animal –> person. Finland and Sweden are the only two countries in the world right now with a permanent McVegan burger on their McDonald’s menu. The transition is somewhat schizophrenic – traditional Finnish cuisine is very meat, cream, and potatoes. Most restaurants we went to would have a menu suitably tailored to those desires, and then a vegan option – no dairy-eating vegetarian middle ground. Finland is exploring the consumption and production of alternative protein – as of November 2017, it is legal to sell insects as food. Cricket as foodstuff is gray area for claims to veganness, but the Finnish government decided the makers of cricket snacks were sustainably well intentioned enough that they’ve allowed mass sale of cricket protein bars and powder in the country. Crispy crickets might be the hot granola of 2020. Both cricket snacks and vegan hamburgers are reflective of design culture – they are premeditated, tailored to meet a specific need, and branded to the appropriate audience. Products like Planti – grain based dairy alternatives – could be classified as very watery porridges. And if one were to make their oat porridge WITH oat milk, we’d have an oatfinity on our hands.

The future harkens the past.

New Nordic cuisine is more or less the Scandinavian expression of the slow foods movement that has taken the culinary world by slow-burning storm since the 70s… 90s… going strong for sure in the last 15 years. Think noma – the world’s most famous restaurant of the moment, where a chef serves seasonal, hyper-local ingredients cooked to perfection on beautiful small plates. New Nordic, of course, is premised on Old Nordic, and recipes are adaptations of traditional cuisine.  There are lots of New Nordic restaurants, or ravintolas, in Helsinki.

The Finns are bears, and must prepare for hibernation. Finnish cuisine is regional, but there is an overarching abundance of dark breads, cream sauces, fish, root vegetables, and many, many delicious kinds of porridge, or puuro.

Porridge is ubiquitous in Finland, but understated. A bowl costs slightly more than a cup of coffee. The grocery store sells myriad porridges of different grains. The best bowl of porridge we had was at a porridge hut outside of the fancy specialty food hall. The stand felt like an institution. The old women ladling out the porridge were happy to share their recipe, which we’ve included below. They make a different grain every day (rice porridge is always on the menu though). The tables and serving platters were decorated in Finnish Olympics regalia. Porridge is the breakfast of champions. We ordered a half and half bowl of rice and semolina porridges. It was served with a cup of milk, smothered in butter, and the tables had shakers for cinnamon and sugar.

Bring water to a boil. Add porridge (they cook either rice, 4 grain flour, barley, oatmeal, semolina, or rye). Cook for half an hour, then lower heat. Add salt to taste. Add milk to the rice and semolina porridges.

Another traditional Finnish porridge is mämmi. Mämmi is rye flour that is cooked with malted rye, served as an Easter dessert with whipped cream and orange zest. We learned about mämmi because we visited a bar that had a mämmi-flavored stout on tap. Beer has enormous similarities to porridge. Both are boiled grain sustenance. Both are kept in pots. The Finns love beer, and they have many nice types of dark beer. They also have dark bread, dark porridge, listen to dark music, and wear lots of dark clothing. We were so inspired by mämmi and Finnish traditional cuisine, such as this appetizer we were served in a pub…

… that we tried to create a porridge based on our trip. Alas. This porridge is not the future.

We call it the Viking Bowl.

It is heartier and more aggressive than a Buddha Bowl. Both have roots in monastic cuisine – the base of the Viking Bowl is Danish øllebrod, or, “beer bread,” which was eaten by monks in the Middle Ages. It’s similar to mämmi, but not a dessert. We boiled chunks of stale homemade rye bread in a stout beer and topped one bowl with gravlax, sour cream, pickles, and honey, and the other bowl with a vegan tahini leek mush and roasted beets. Both tasted terrible. Please don’t make them, eat them, and then leave mean comments. Failure is necessary for greatness, and the pictures turned out pretty, so we leave you with some photos of weird adaptations of Finnish porridge. Do not hesistate, however, to dive into the various elegant and satisfying Finnish porridges at the end of the page. Kiitos for reading this post!

For delicious Finnish porridge, we recommend these recipes: 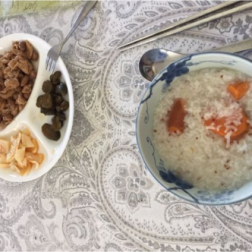 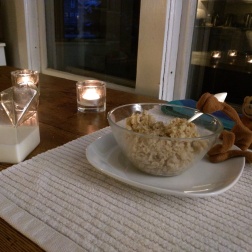 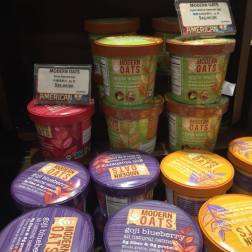 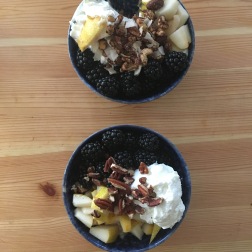 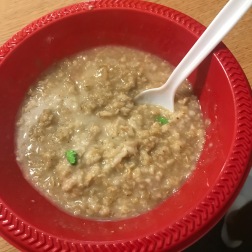 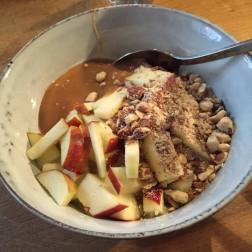